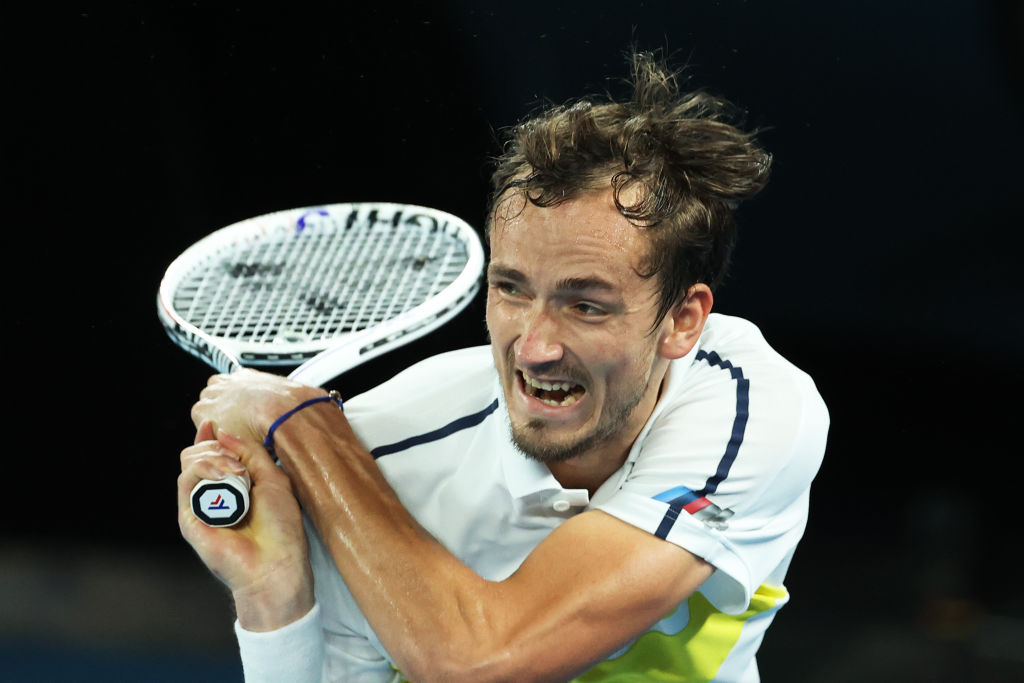 Daniil Medvedev will seek to become the first man to stop Novak Djokovic in the final of the Australian Open after he cruised past Stefanos Tsitsipas.

Medvedev, the Russian fourth seed, is the most in-form player in men’s tennis and was simply a class above his Greek opponent.

The 6-4 6-2 7-5 victory in two hours and nine minutes extended his win streak against all opposition to 20 matches but arguably more impressive, he has now won 12 straight matches against top-10 opposition.

Only six players -Djokovic, Roger Federer, Rafael Nadal, Pete Sampras, Thomas Muster and Ivan Lendl – have strung such a run together. Djokovic, the eight-time Australian Open champion, will look to bring it to a halt on Sunday.

Djokovic has won all 17 of his matches in the semi-finals and beyond at Melbourne Park but many will surely be backing Medvedev – who will play just his second Grand Slam final – to end that dominance, such is his brilliant form.

In his winning run, he has picked up big titles in Paris and London as well as leading Russia to the ATP Cup, and he continues to frazzle opponents’ brains with his stunning court coverage and even more stupendous depth of shot.

Tsitsipas, who fought back from two sets down to beat world No. 2 Rafael Nadal in the quarter-finals, simply had no answers to Medvedev’s relentless pressing and another shock comeback rarely felt viable once his opponent tightened his grip on the match.

While Tsitsipas packs his bags to prepare to leave Melbourne, Medvedev, 25, will be hoping for one final triumph against the greatest Australian Open champion there has been.

It was Medvedev who drew first blood. Tsitsipas, 22, went long on the second break point of the match to fall behind in the fifth game in the match.

There were no other break points in the set and although it took Medvedev four set points to get over the line – one of which was missed with a double fault – he wrapped up a one set lead with a back-to-back ace and unreturned serve.

Medvedev continued to turn the screw at the start of the second set and got his reward with an early break.

Tsitsipas’s frustration was taken out on his water bottle in the changeover, which he threw at the floor, with water exploding on the court.

Despite a wry word in chair umpire James Keothavong’s ear from his opponent, the Greek avoided an official warning.

Things went from bad to worse for the Greek. Medvedev upped the ante again with some sublime returning to break before holding to clinch a two-set lead after an hour and 15 minutes.

While Tsitsipas had done the seemingly impossible and beaten Nadal from two sets to love down in the quarter-finals, beating Medvedev in this form is almost the greater task and so it proved.

An early break in the third set put Medvedev in total control but he still found time to have a quick moan to the umpire again: ‘His father [Tsitsipas’s coach Apostolos] is talking way too much, man.’

The pro-Greek crowd were given a rare moment to cheer after Tsitsipas fought to hold in the fifth game of the third set, saving more break points, before sealing his first break of the match.

Medvedev came under pressure in his next service game but dug himself out of a hole to keep things on serve in the third before rediscovering his early match form to break – sealing it with an outrageous down-the-line passing backhand on the run -and finish with a bang.

Djokovic, his final opponent, is in no doubt just how strong Medvedev is.

”Daniil Medvedev, as I said previously, is the player to beat,’ said Djokovic after his semi-final win over Aslan Karatsev. ‘He’s on a big winning streak.

‘He ended out the season best possible fashion. I mean, winning quite comfortably, actually, against top players, against myself in straight sets in London, and he just has improved a lot. I mean, he has a big serve. For a tall guy, he moves extremely well.

‘Forehand maybe was his weaker shot, but he has improved that, as well. Backhand is as good as it gets. He’s so solid. He doesn’t give you much. But he’s not afraid nowadays to attack and get to the net and take it to his opponents.

‘He’s just so solid. Also, I heard Jim Courier calling him a master chess player because of the way he tactically positions himself on the court, and it’s true. You know, he’s definitely very smart tennis player.’

He and American partner Rajeev Ram – the defending champions – took out his compatriot Jamie Murray and his Brazilian partner Bruno Soares 6-4 7-6 (7-2).

‘I mean, I think this time last year or 18 months ago I wouldn’t have expected it, no,’ said Salisbury of being on the verge of becoming a multiple Slam winner. ‘I think I knew it was possible but maybe didn’t think it would be so early on in my doubles career.

‘So, yeah, I knew it was a possibility. I mean, I haven’t really thought about what I would like to achieve in my career. I definitely, yeah, I think after last year when we won I knew that I could win lots of Grand Slams and hopefully, yeah, that’s the goal.

‘Yeah, obviously wanting to win tomorrow and make it multiple Grand Slams. Whether it can be many more, I don’t know, but obviously that’s the goal.’