Tennis Grand Slams: Who is the greatest of all time?

Andrey Rublev says he is full of confidence and can give Roger Federer and Novak Djokovic a run for their money at Wimbledon. The Russian is seventh in the ATP world rankings and will come to the All England Club in form after a strong showing at the Halle Open.

The start of Wimbledon is still nine days away, but the men’s singles draw is already looking more open than in previous years after high-profile withdrawals.

Rafael Nadal has pulled out of the Grand Slam and the Olympics in order to recuperate following a hard clay-court season, while world No 13 David Goffin will also miss the tournament with an ankle injury.

Federer was beaten by 20-year-old Felix Auger-Aliassime at the Halle Open on Wednesday and is yet to find form following knee surgery.

Djokovic is in better shape, having moved on to 19 Grand Slam titles with victory over Stefanos Tsitsipas in the French Open final last Sunday.

The Serb is now just one Major short of Federer and Nadal and will be the firm favourite at Wimbledon, which gets under way on June 28.

JUST IN: Naomi Osaka withdraws from Wimbledon after Rafael Nadal also pulls out 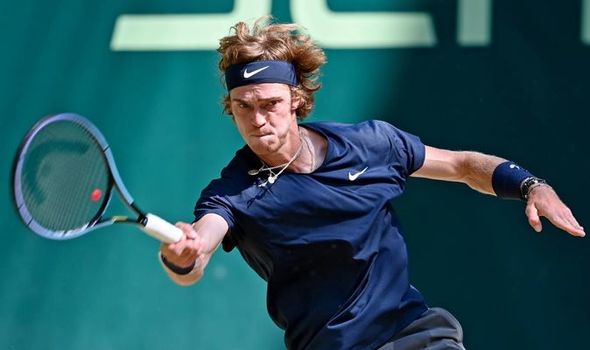 However, having beaten Philipp Kohlschreiber to reach the semi-finals at Halle, Rublev has fired a warning to the big names that he is on the rise.

“I have adapted to the grass, but there are so many things I can still improve on the grass. For example, with the slice, the volley, and moving better,” Rublev said.

“Also, defending on grass, because it is different, you can’t defend with high balls like on clay, so I think I am still far away.

“In general, though, because my game is to play aggressively. If you play aggressive, this helps you a lot on grass, so I think my game for this surface is ok.

“Philipp Kohlschreiber is good on this surface, so this match has given me confidence.”

Rublev lost to Jan-Lennard Struff in the first round at Roland Garros, but had an impressive 28-2 record at ATP 500 tournaments since the tour resumed from the COVID-19 suspension in August 2020 going into Saturday’s Halle semi-final against Nikoloz Basilashvili.

And with Nadal out of Wimbledon, the 23-year-old is happy with his situation going into SW19.

“Of course, for the players like me, with Rafael Nadal not playing, it is a big advantage for me as I am going to be a higher seed now,” he said.

“But there are so many guys that are really tough to play on grass. For example, imagine having Struff in the first round of Wimbledon or Nick Kyrigos.

“On grass, it is so tough to play players who serve well so who knows.”