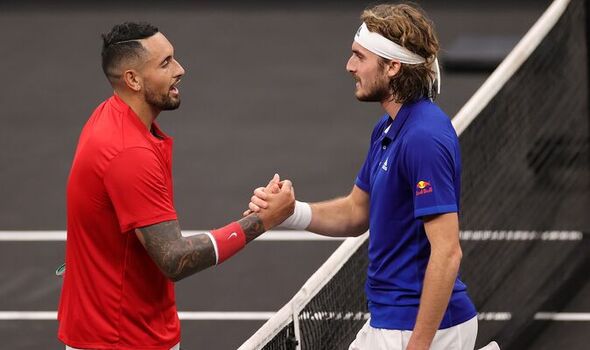 Stefanos Tsitsipas’ mum has revealed that Nick Kyrgios is the only player who can bring him into a “state of complete confusion”. The pair have shared a rollercoaster relationship and left off on frosty terms after their fiery Wimbledon match that saw the Greek star call the 27-year-old an “evil bully” after losing in four sets.

Tsitsipas and Kyrgios’ rivalry has seen the pair go from trading blows on social media to pairing up as doubles partners over the last few years. Their most recently clash saw them return to being enemies as the Aussie defeated the world No 5 in the Wimbledon third-round after calling for Tsitsipas to be disqualified when he smashed a ball into the crowd.

The world No 21 leads their head-to-head by four wins to one loss, with his only defeat coming at the 2021 Laver Cup in Boston. And Tsitsipas’ mum has now explained just why Kyrgios’ record against her son is so one-sided, as she claimed he was the only player who had a certain effect on him.

“The only person, perhaps, who brings him into a state of complete confusion is Nick Kyrgios,” Julia Apostoli told Championat. The 24-year-old’s mum took aim at Kyrgios as she claimed the 27-year-old decided that he didn’t want to follow the sport’s “rules”, causing conflict between himself and her son.

She continued: “Styopa [her nickname for Stefanos] still grew up in a sports family. His grandfather is an Olympic football champion. And there are some things in sports that cannot be ignored. That is, 100 years have passed since the Olympic movement existed.

“And for 100 years, no one has encroached on it. And only Nick decided: the rules for him are not the rules. And even more so in tennis. Tennis is a very stiff sport.” Julia also reflected on Tsitsipas’ recent four-set defeat to Kyrgios at Wimbledon, claiming her son lost because he didn’t give in to playing “dirty tennis”.

“Our match turned out to be very nervous with Nick Kyrgios,” she said, reflecting on their dramatic third-round Wimbledon clash that saw both men fined for their behaviour afterwards.

“That is, we were practically offered to play dirty tennis there, but we don’t know how to play such tennis. Therefore, Styopa lost his temper and left the court without getting there.”