The storm clouds looming over this year’s Australian Open developed from figurative to literal on Friday, as rain added another hurdle to the final preparations for the troubled tournament.

Like a nuclear doomsday clock, this year’s Open has been under constant threat from cancellation due to the COVID-19 pandemic. The positive test of a hotel quarantine worker in recent days was the latest setback to bring the minute hand closer to midnight. 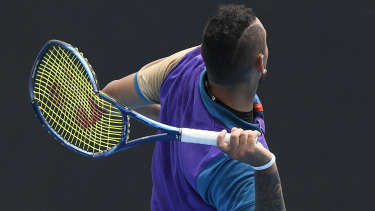 Australia’s Nick Kyrgios prepares to throw his racquet into the stands.Credit:AP

With play halted on Thursday while hundreds of players were tested, a busy list of tune-up matches was planned for Friday — with some players playing twice. Meanwhile, organisers frantically put the final touches (sanitised, of course) on the event ahead of the first round of matches on Monday.

Heavy skies threatened to disrupt the schedule during the early part of the day, however the rain didn’t come soon enough for mercurial Australian hope Nick Kyrgios as he battled a sore knee during a straight sets 6-3, 6-4 loss to Croatian Borna Coric.

It was a typical Kyrgios performance in many ways, with some blistering shots, plenty of errors and two code violations: one for swearing and another for breaking a racquet, which he then hurled into the vacant seats. There were also several underarm serve attempts.

He was clearly frustrated by his left knee, clutching it during changes of serve and looking generally hampered as Coric moved him around the court and into the net. After one point he verbalised his annoyance, in usual blunt Kyrgios fashion, at being unable to get into the right positions to hit each shot. 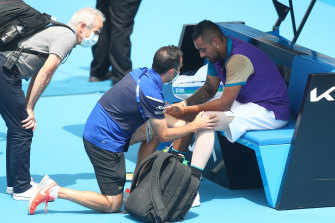 A physiotherapist assess Nick Kyrgios’ knee during a break in his match against Borna Coric of Croatia at Melbourne Park.Credit:Getty Images

Whenever Kyrgios plays at Melbourne Park he draws a crowd. This time there was barely enough for a game of mixed doubles and the 25-year-old appeared a little flat without anyone there to cheer him on.

After the match, Kyrgios reflected on what the empty stands might mean for him in the main draw: “It’s going to be tough. Especially in your home backyard,” he said.

“Last year when I played [Karen] Khachanov or [Rafael] Nadal … every single person in the stadium was going nuts. It was like a movement last year with the bushfires, with everything.”

“I couldn’t go outside really. It was insane. We’re just going to have to put up with it this year.”

Those spectators who were there wore masks, however only indoors, with the outside courts mostly free of face coverings. QR codes greeted ticket holders as they walked into each stand.

Another change was the lack of line judges, with computers replacing humans for the calls of in and out. In a nod to tradition, a recorded “fault!” played over the PA rather than an automated beep. The ball kids still did their thing, charging around the court to pick up each stray ball.

The rain eventually came, along with a clap of thunder, however it only forced a brief suspension as the sun shone soon after and play resumed.

The organisers will be hoping the clouds stay parted, particularly those related to COVID, over the next couple of weeks.

Our Morning Edition newsletter is a curated guide to the most important and interesting stories, analysis and insights. Sign up to The Sydney Morning Herald’s newsletter here, The Age’s here, Brisbane Times’ here, and WAtoday’s here.