Home » Tennis » The Djoke is on Fortress Australia

The rules of tennis are simple. A ball is in or it’s out. A serve either clears the net or it doesn’t. Even at the relentless speed at which tennis is played at the Australian Open, it is a game of clear delineation.

Prime Minister Scott Morrison would have us believe the rules which govern our borders are similarly clear. “Rules are rules, especially when it comes to our borders,” he tweeted within an hour of a decision by border officials to cancel the entry visa of Novak Djokovic. “No one is above these rules.” 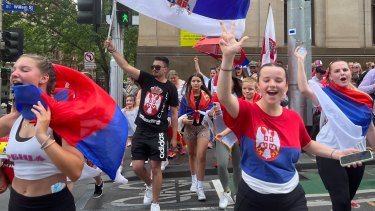 Serbian fans celebrate the news that Novak Djokovic had his visa cancellation overturned and was being released from detention.Credit:Ashleigh McMillan

We now know it was Australia’s overzealous border officials, rather than the world’s best tennis player, who broke the rules. And nothing about this saga, which may still have a ways to run, is remotely simple.

Djokovic won his case in the Federal Circuit Court on Monday after Minister for Home Affairs Karen Andrews conceded her agents acted unreasonably in cancelling his visa. To chants of “Nole! Nole!” Djokovic’s supporters celebrated the decision outside the largely deserted court building.

It means that Djokovic, for now, can play in next week’s Australian Open, but he is not quite in the clear. At the end of Monday’s hearing, the government’s senior counsel Christopher Tran flagged that Immigration Minister Alex Hawke, who has the power to cancel a visa by ministerial decree, was considering a game-changing intervention.

The implications of this for 34-year-old Djokovic, who would be unable to return to Australia for three years, would be devastating. As judge Anthony Kelly gravely noted: “On a view, the stakes have risen, not receded.”

Djokovic discovered last Thursday, in sleep-deprived hours after a long-haul flight, that having a visa doesn’t necessarily mean you can enter this country and having a medical exemption from COVID-19 vaccines doesn’t get you off the hook for not having one.

Judge Kelly, the person charged with making sense of these contradictory truths during a day-long, online hearing, spoke for anyone who has been trapped in the bureaucratic morass of Australia’s pandemic response over the past two years when he rhetorically asked the court: “What more could this man have done?”

The short answer is get a jab. But then, had Djokovic done the sensible thing to start with, the world would have never been given such rare insight into how the walls of Fortress Australia are bloodlessly defended, sub clause by Roman numeral, in the dead of night.

For all the legal firepower amassed to fight this case – two senior counsel and a junior barrister perched high in Melbourne’s Rialto building for Djokovic and two barristers briefed by Ms Andrews – few facts were in dispute.

There is no argument that Djokovic, when he arrived in Australia late last Wednesday, was armed with a vaccination exemption provided by a qualified physician and infectious disease expert provided by Tennis Australia, and a letter from the Department of Home Affairs confirming his paperwork appeared to be in order.

He had recently recovered from a COVID-19 infection and by the reading of health guidelines by the Tennis Australia panel, did not require vaccination for another six months.

Djokovic’s medical exemption, endorsed by a separate Victorian government panel of experts, was based on the published advice of the Australian Technical Advisory Group on Immunisation, a group of scientists who throughout the pandemic, has advised the federal government on how and when to inoculate the population.

There is also no quibble that the border officials who dealt with Djokovic once he disembarked inside Melbourne Airport had discretionary powers to overrule whatever documentation the Serbian pulled from his carry-on luggage.

If they thought he might present a health risk by coming to Australia, they could cancel his visa and put him on a plane back to Dubai.

The case turned on whether the border officials acted reasonably and fairly in exercising this power. The evidence before Judge Kelly was that Djokovic, a nine-time Australian Open winner who since he was a teenager has spent every January in Melbourne, was treated shabbily.

Djokovic was detained shortly after midnight on Thursday. Judge Kelly said he had read the transcript of the interactions Djokovic had with his border examiners over seven or so hours. The judge was not impressed with the script.

“Mr Djokovic is quite candid,” Judge Kelly reflected. “He says ‘look, if I have got these facts wrong I am sorry I am mistaken about it, but I understand I have given you everything you want and in effect, I wouldn’t have even come here unless I had’.”

Where the judge described Djokovic as candid, Nicholas Wood QC told the court his client was “utterly confused”.

Having given Djokovic until 8.30am to rest and seek advice before continuing the interview, the border officials woke the tennis player two hours earlier and tried to convince him it was in his best interests to continue the interview without having spoken to anyone.

One of the officials said he wanted to resolve the issue before he finished his shift.

“It is not a case of time being denied,” the judge said. “It is in fact, objectively, broadly, an agreement to give time which is then reneged upon.

“It has the quality of this ex post facto view. We have these people saying ‘look, getting in touch with your lawyers is really not going to help any of this so why don’t we just get it done’?”

This was the point that broke the government’s case. Mr Tran, having sought an adjournment to prepare his response, returned to court with the news that Ms Andrews had conceded the entire match.

Ex post facto is sharp language for any judge. Within the Latin lies a thinly veiled suggestion that Djokovic was stitched up.

This is the view of Srdan Djokovic, who has accused the federal government of deliberately humiliating his son. “Our pride is a prisoner of these idiots,” he declared.

Conspiratorial nonsense? That may depend on what Mr Hawke does next.

Our Breaking News Alert will notify you of significant breaking news when it happens. Get it here.