Australian world No.1 Ashleigh Barty won't be defending her French Open title in Paris, having decided against travelling to Europe.

“It has been a difficult decision to make but unfortunately I will not be competing in Europe this year. Last year’s French Open was the most special tournament of my career so this is not a decision I have made lightly," she said in a statement. 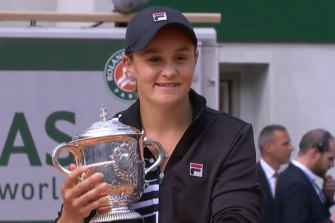 "There are two reasons for my decision. The first is the health risks that still exist with Covid. The second is my preparation, which has not been ideal without my coach being able to train with me due to the state border closures in Australia.

"I wish the players and the French Federation all the best for a successful tournament.

"I now look forward to a long pre-season and the summer in Australia. It has been a challenging year for everyone and although I am disappointed on a tennis front, the health and well-being of my family and my team will always be my priority. Thank you to my fans for your continued support, I can’t wait to play for you again.”

The French Open will allow a maximum of 11,500 spectators per day to adhere to strict health protocols and curb the spread of COVID-19 when the grand slam begins later this month, the French Tennis Federation (FFT) said on Monday.

The French Open, traditionally held in May-June, was postponed earlier this year due to the COVID-19 pandemic and will now be held at Roland Garros from September 27 to October 11.

France has recorded nearly 31,000 COVID deaths, according to a Reuters tally.

The FFT said a maximum of 5000 spectators per day would be allowed to watch matches at both the Philippe-Chatrier and Suzanne-Lenglen showcourts while only 1,500 fans would be allowed at the smaller Simonne-Mathieu court.

Seating arrangements would have a gap of one seat on each row and no more than four people can sit side-by-side while wearing masks would be mandatory for anyone over the age of 11.
The qualifying rounds, which begin on Sept. 21, will be held behind closed doors.