The world No. 13 is currently in quarantine ahead of the first Grand Slam of the year and in an interview with an Israeli news channel, the normally mild-mannered Spaniard slammed the Victorian government. 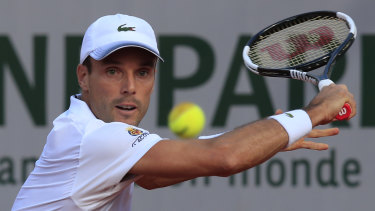 Spain’s Roberto Bautista Agut plays a shot against Spain’s Pablo Carreno Busta in the third round match of the 2020 French Open.Credit:AP

"It’s really, really tough. I will have to work a lot mentally."

The Australian Open tournament director spent Monday night on a conference call with more than 500 players.

"I have to say that on that call, there were about 500 players and the vast majority are happy to be here, pleased to be here and really getting ready to get out and play in the next two weeks the lead in event and then the Australian Open on February 8," Tiley said.

"The reports we’re seeing don’t represent the entire playing group. For the most part, they’ve been really good."