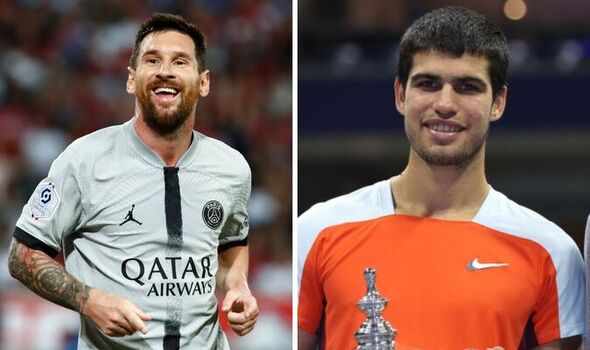 Teen sensation Carlos Alcaraz has the star quality of “Ronaldo, Maradona and Messi combined”, according to Greg Rusedski. And the Spaniard’s coach has warned the youngest ever world No 1 has reached only 60% of his potential after his stunning US Open triumph.

At a historic Grand Slam where Serena Williams retired, fan favourite Alcaraz heralded the start of a new age in men’s tennis by lifting his first Major title. He beat new world No.2 Casper Ruud in a thrilling final full of outrageous rallies 6-4 2-6 7-6 6-3 amid raucous scenes in the Arthur Ashe Stadium.

Chants of “Ole, ole, ole, Carlos, Carlos” rang around the biggest stage in tennis like a football match. He is the youngest Grand Slam winner since Rafa Nadal at the 2005 French Open.

“It won’t be like Emma Raducanu last year where she won and then disappeared for a year.,” said the 1997 US Open finalist. “He is the real deal, He has everything. This guy is a phenom. Djokovic was the best mover before him. Before that it was Federer. This guy is like watching Ronaldo, Maradona and Messi combined as one as an athlete. He is just off the charts. He could win over 20 Majors.” 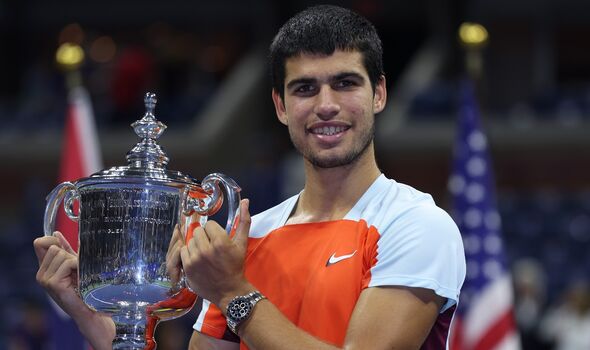 Alcaraz only won his first ATP Tour match in February 2020 and had to qualify for last year’s Australian Open when he was ranked world no.141. His rise up the rankings has been as quick as his coverage of every corner of a tennis court. But his coach Juan Carlos Ferrero said: “I think he’s on 60% of his game. He can improve a lot of things. “Once you get to the No. 1, it’s not done. He knows and I know that we have to keep working.”

Nadal and Novak Djokovic had shared 15 of the last 17 Grand Slam titles. Asked if this was the start of the Alcaraz era, former world No.1 Ferrero said: “I would love it to happen. I think he was born to play this kind of tournament, this kind of match.”

Alcaraz needed to save a match point against Jannick Sinner in the quarter-finals after losing to the Italian at Wimbledon.

”Maybe Sinner and Carlos could dominate the tour for maybe the next 10 years,” Ferrero added. “The players now, they’re going to play very motivated against him now he’s No.1. It’s like Real Madrid-Barcelona, there’s a rivalry that gets you to increase your level. He has to be ready.”

Ferrero encouraged Alcaraz to play with freedom after an unhappy start to the American hardcourt season. “I came here just to enjoy,” said the teenager. “To smile on court and to enjoy playing tennis.

“It’s crazy for me. I’ve never thought that I was going to achieve something like that at 19 years old. It is incredible to create history being the youngest world No.1 but it is even more difficult to do what the Big Three have done, to stay there for 20 years. I don’t want to compare myself to them , but I’m going to try to be even a little like them.”

Djokovic’s refusal to take a Covid 19 vaccine meant he was absent in New York but the nine-time champion is set to be allowed back to the Australian Open in January. And Nadal will again be the favourite for the French Open while Russian Daniil Medvedev, the first player to top the rankings outside the Big Four since 2004, is only 26. He was banned from Wimbledon. But Alcaraz has won 51 matches and five titles this year, including beating Nadal, Djokovic and Alex Zverev to win the Madrid Masters in May.

New world No.2 Casper Ruud: “He’s riding that wave. At the moment he’s the best player in the world in my eyes. He deserves that spot.” Alcaraz said: “I’m hungry for more. I want to be on top for many weeks, many years.” And he pointed to the US Open trophy and said: “I want more of these.”