The British woman who knows more about Wimbledon pressure than anyone else came out in support last night of Emma Raducanu.

Virginia Wade, the last home woman to win the singles, urged the 18-year-old not to be discouraged by having to leave the tournament so abruptly after a promising start.

‘The main thing for Emma to understand is that she has not let anyone down, including herself,’ Wade, 75, told Sportsmail from her home in New York, where she has been glued to Wimbledon after being unable to travel due to restrictions. 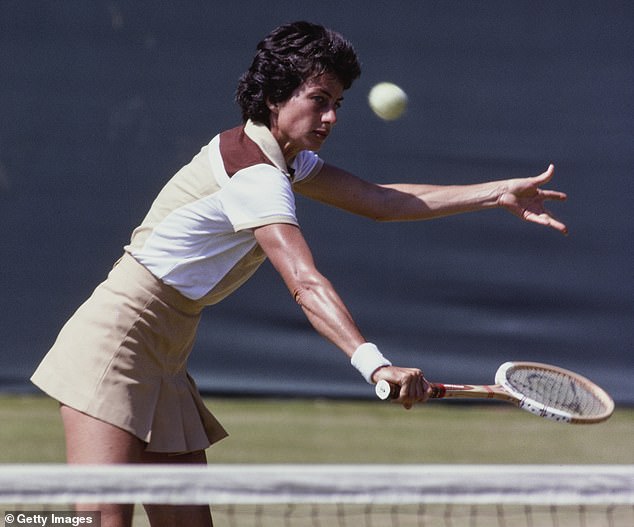 ‘The only thing in a match is to do the best you can, and that doesn’t necessarily mean winning every time. Even the most experienced player would have been hard-pressed to contain themselves in such an intense and emotional environment.

‘All the elements became amplified and she has not had the opportunity to know how to desensitise herself to any of those factors.’ 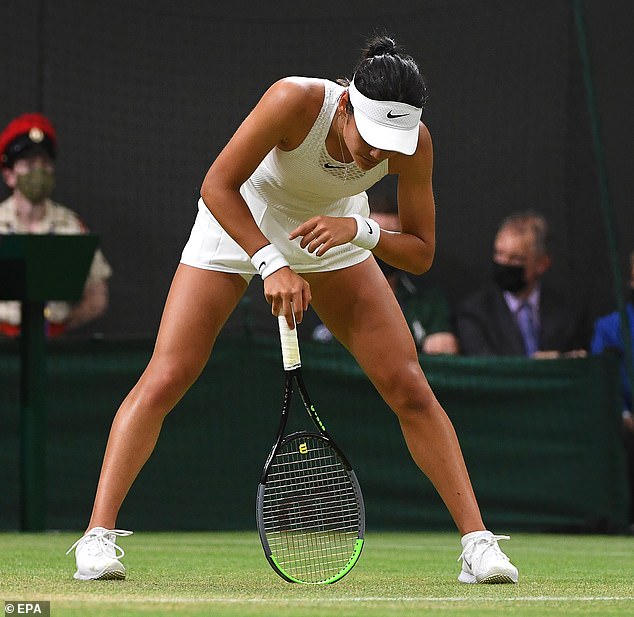 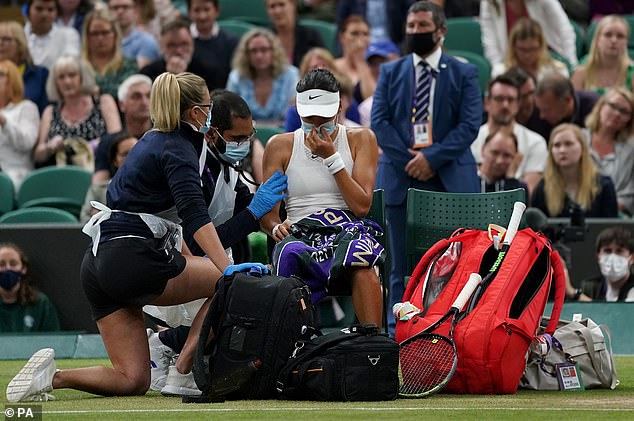 Wade won Wimbledon in the Silver Jubilee year, 1977, with the Queen in attendance.

‘Emma needs to focus on how incredibly well she did to make it this far into the toughest tournament in the world, on her first try,’ said Wade, who also won the US and Australian Opens.

‘It has been compulsive watching and I am thrilled to see a young British girl with such athleticism, poise and charisma.’

Emma Raducanu is the youngest British female to make it into the second week at Wimbledon for more than 60 years.

Christine Truman reached the fourth round in 1959 aged 18 years and five months – two months younger than Emma. Remarkably, two years earlier Truman made it to the semi-finals aged 16 in her debut in SW19 in 1957.

Truman’s success was all the more impressive given that since birth she was partially blind in her left eye – a fact her family had kept secret from competitors in her early days.

Asked whether her daughter’s sight had contributed to her disappointing performance at Wimbledon in 1962 when she was knocked out in the third round, her mother told a newspaper: ‘It is nonsense to suggest that Christine’s eyesight has affected her tennis in any way. It was exactly the same when she was on top of her form.’

In a career spanning more than two decades, Truman, an unpredictable player whose form could soar one week and crash the next, won titles in France and Italy and was later a finalist at both Wimbledon and the US Open. She had another successful Wimbledon run in 1965 when – unseeded and all but written off by observers – she made it to the semi-final. Continuing to play at domestic tournaments throughout her career, she was Martina Navratilova’s first opponent at Wimbledon in 1973.

She married former Wasps rugby player Gerry Janes, and the pair had four children, one of whom – Amanda Keen – went on to become a professional tennis player who twice played at Wimbledon and had a career-best ranking of number 207. Mrs Truman Janes retired from tennis in 1975 and became a commentator for BBC radio.

She was awarded an MBE in the 2001 Queen’s Birthday’s Honours list for her services to sport. She has also published several children’s books including her first, Dilly And Other Poems, about a loveable doll which finds itself in different situations, such as – unsurprisingly – learning to play tennis.

Even though she stopped playing tennis competitively many years ago, Mrs Truman Janes still takes to the court at her local clubs in Aldeburgh and Thorpeness, Suffolk. She told her local newspaper: ‘It exercises all the muscles and it is something you can keep doing into old age.’ Meanwhile, Britain’s men’s No 2 Cameron Norrie – the last British star in the men’s singles after Andy Murray crashed out of the tournament on Friday – lost his match against Roger Federer.

Norrie, 25, put up a valiant effort against the eight-time champion but was beaten in four sets. The player stopped during the match to give a memento of his official Wimbledon towel to a young spectator who had been hit by a tennis ball. It was the third consecutive Grand Slam event where Norrie had reached the last 32, losing to Rafael Nadal at both the Australian and French Opens prior to his defeat to Swiss veteran Federer.

Australian Open 2021: All the round two action from Melbourne Park

Dominic Thiem sets up US Open final with Alexander Zverev

Tomic crashes out of Wimbledon contention after 18-minute capitulation