Home » Tennis » ‘We got pumped tonight’: Alcott and Davidson settle for doubles silver ahead of Aussie star’s singles final

Despite coming off a physically taxing three-set semi-final on Tuesday, which he later labelled the hardest match of his career, Alcott paid credit where it was due after he and partner Heath Davidson succumbed to clinical power-hitting from their European rivals. 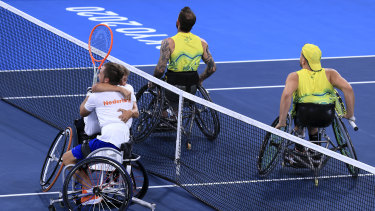 “We got pumped tonight. No excuses,” Alcott said. “No rain, no roof closure, no me being tired … they were better than us. They deserved it and good on them. To be that young and to bring it to us was impressive.”

Alcott and Davidson are the two best mates coming off gold in Rio who have become a force to be reckoned with in quad doubles in recent times.

In this match, they saved service games and wrestled back a break when the match looked dead and buried in the second set, but gave one back straight away to quickly capitulate and settle for silver.

“They blasted winners past us,” Davidson said. “My ball quality wasn’t quite there tonight. It put us under so much pressure. No excuses there, they just played much better than us tonight.

“I don’t feel like my performance was up to its highest quality and that just put us under so much pressure. A little disappointed in myself, but I know Dylan doesn’t really care about how I played.

“I hope Dyl can go out there and give it a red-hot go tomorrow.”

Alcott, the world No.1 quad singles player, is looking to make it back-to-back Paralympic gold medals when he squares off once again against Schroder.

“I’m gutted about now, but I’ll cross that bridge tomorrow,” Alcott said. “You’ve got to suck it in for what it is. 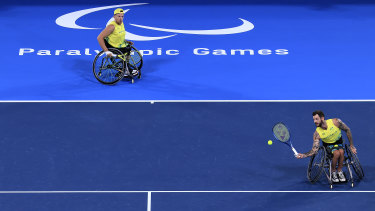 Alcott and Davidson were beaten in straight sets but will take home a silver medal. Credit:Getty

“Yeah we lost and in a two-horse race, it doesn’t feel like you win silver, you lose golds, but we still won silver. We’re proud of that and will be forever.

“I’m going to rest and recover and make the whole of Australia proud tomorrow with my effort. We’re going to do it together that’s for sure.”

After winning Australian and French titles this year, plus Wimbledon, Alcott could complete a rare ‘golden slam’, which involves winning all four majors plus adding a Paralympic gold medal to the collection. Alcott will head to the US Open in New York straight after the singles final.

“I don’t feel that washed [up] just yet,” Alcott said. “I’ve still got another match before you write me off. We’ll see how we go. To be that young and [for the Dutch pair] bring it to us like that … impressive.

“I like to think that’s what I was like as a 17-year-old winning a gold medal playing wheelchair basketball. I just wanted to smash everyone. Good on them, they deserve this gold medal.”