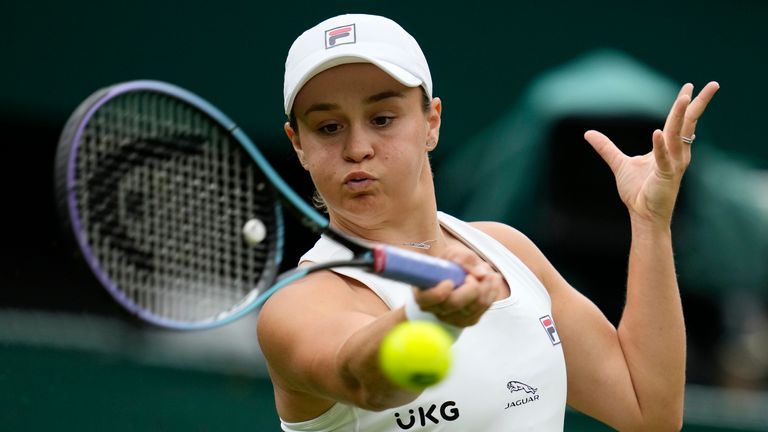 World No 1 Ashleigh Barty has never quite delivered at Wimbledon but, after an emotional first-round match against Carla Suarez Navarro, she is out to add a second Grand Slam crown to her CV.

Barty ran out a comfortable 6-1 6-7 (1-7) 6-1 winner over Suarez Navarro, who completed her treatment for Hodgkin lymphoma earlier this year and was given a rousing reception as she made her way onto Centre Court.

The Spaniard returned at the French Open as part of a ‘farewell tour’ which will also take in the US Open in September but, once the cheers had subsided, she was no match for Barty – who saved her support for a touching tribute after the match.

“She deserves nothing but the best. I just said to her, It was a pleasure to share the court with you,” said Barty.

“She’s an exceptional person, a great fighter, a great competitor, and very well-loved and respected in the locker room.

“She’s going to be sorely missed. I wanted to give her the appreciation that she thoroughly deserves. The crowd was exceptional, they gave her a remarkable reception as well as she’s walking off the court.” “I kind of didn’t know what else to do. I wanted to give her a hug, just say congratulations on an exceptional, remarkable career.

“I know she’s still got a little bit to go and I wish her all the very best.”

A break in play to close the roof was the only early obstacle for Barty, who fired down 13 aces, 38 winners and converted all five break points on her way to a meeting with Anna Blinkova or Timae Babos in the second round.

In four previous visits spread across eight years she has never gone beyond the fourth round – and that came in 2019, the year of her solitary major title at the French Open.

She was beaten that year, as the top seed, by Alison Riske and seeded first again this year she will hope to improve on that.

2019 was her fourth appearance in the main draw, and such is the former cricketer’s career path – she has played in the Big Bash League in Australia – that is only one more than the three times she failed in the qualifying tournament.

“Overall happy to get a start here at Wimbledon, play that really solid match, and now we kind of feel like we just keep working our way through the tournament as best that we can each and every day,” she added.

“Grass-court tennis has always felt like it’s come quite naturally to me. It’s just about trying to go out there and play the best that I can on that day.

“For all but one little hiccup, serving for the match, it was really good. I mean, we obviously go back and debrief and go through and think of ways that we can improve and be better, what we’ve learnt from that match.

“To be able to run away with that third set in the end, kind of get off the court pretty quickly, was really nice.”

After the opening three games went with serve, Barty returned from the break to close the roof as the rain fell, to break her opponent twice and reel off four games in quick succession to claim the first set.

A more competitive second set went with serve until the ninth game when Barty converted one of her break points, having seen Suarez Navarro fail to capitalise on hers, and a routine victory looked likely. But, at the fourth time of asking, the Spanish veteran finally took her chance to level at 5-5.

An inspired Suarez Navarro bossed the tie-break, losing just a solitary point, to level the match and force a deciding set where Barty had no room for sentiment, needing just 21 minutes to take her place in the second round.

Before she took to the microphone, Suarez Navarro was left to a departure every bit as emotional as her arrival.

A fitting stage for @CarlaSuarezNava's return to #Wimbledon as she takes on world No.1 @ashbarty… pic.twitter.com/GmaZ8TnMcc

Earlier in the day a trio of seeds made short work of their first-round matches, easing into the second round before 12.30pm as play got underway as scheduled after Monday’s opening-day downpours.

Tunisia’s Ons Jabeur is seeded 21st but a lively contender for the title after making history in Birmingham just a couple of weeks ago.

That title made her the first Arab woman to win a WTA title and she underlined her threat with a 6-2 6-1 demolition of Sweden’s Rebecca Petersen in just 61 minutes – she will next face Venus Williams in a mouthwatering looking second-round contest. 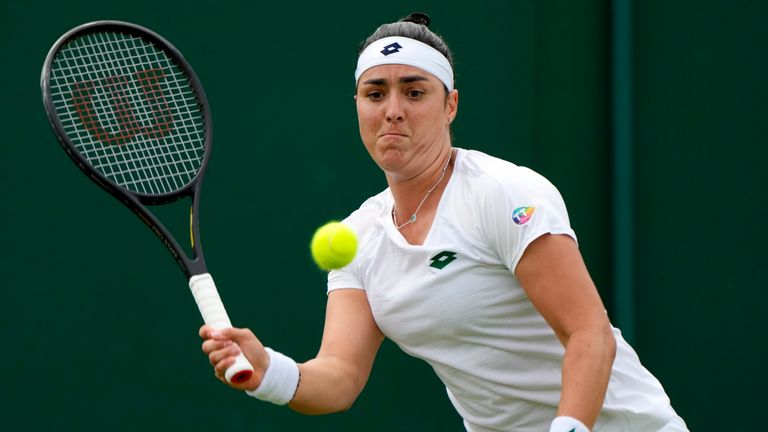 “Ons I would say is one of my favourite people on tour,” Williams said after her victory.

“Honestly she’s just breaking down barriers. The first woman from her country to do anything that she’s doing. She just won her first tournament, so she’s got to be feeling great.

“I just think you’re going to see a whole other generation of women from North Africa or wherever coming into tennis. It’s going to be all owed to her. I think she’s inspiring so many people, including me.”

In her 90th Grand Slam appearance, 🇺🇸 @Venuseswilliams reaches Round 2 with a 7-5, 4-6, 6-3 victory over Buzarnescu.#Wimbledon pic.twitter.com/An6sm9doZ3

She was a 6-1 6-1 winner in just 49 minutes on Court 15, while eighth seed Karolina Pliskova’s quest for a maiden Grand Slam title got off to a winning start as she beat Tamara Zidansek, another to reach the last four in Paris, 7-5 6-4.