The Women’s Tennis Association has warned it could pull all tournaments from China as early as next year if verifiable proof of the safety of missing player Peng Shuai is not provided soon.

Peng, a two-time Grand Slam doubles champion, has not been seen since making sexual assault allegations against a former senior Chinese Communist Party official on November 2.

Her disappearance has caused alarm in the tennis world but on Thursday morning a statement was posted by Chinese state media claiming to be from the 35-year-old, which said she was resting at home and that news about her on the WTA website was incorrect.

“The news in the release, including the allegation of sexual assault, is not true. I am not missing, nor am I unsafe. I’ve just been resting at home and everything is fine. Thank you for caring about me,” the statement said.

WTA chief executive and chairman Steve Simon responded soon afterwards by saying the post had only heightened his fears for Peng’s safety.

“The WTA and the rest of the world need independent and verifiable proof that she is safe. I have repeatedly tried to reach her via numerous forms of communication, to no avail,” Simon said in a statement. 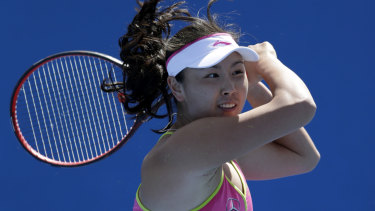 Peng Shuai has not been seen in more than two weeks.Credit:Eddie Jim

“Peng Shuai must be allowed to speak freely, without coercion or intimidation from any source. Her allegation of sexual assault must be respected, investigated with full transparency and without censorship.”

Sources with knowledge of the delicate discussions between the WTA and the Chinese Tennis Association told the Herald and The Age the game’s governing body has threatened to take the extreme measure of pulling all tournaments from China – costing the game hundreds of millions in revenue – if evidence of Peng’s wellbeing is not provided.

“Should we find that what we are asking for cannot happen or will not happen, we are prepared to no longer do business within the region and move forward,” Simon told TIME at the WTA Finals in Mexico.

Simon issued a similar warning in the New York Times.

“If at the end of the day we don’t see the appropriate results from this, we would be prepared to take that step and not operate our business in China, if that’s what it came to,” Simon said.

The WTA staring China down is in stark contrast to the way other sports have handled conflicts with the superpower. 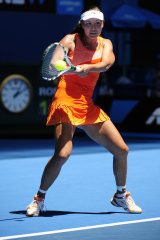 Peng Shuai playing in the Australian Open in Melbourne in 2011.Credit:Vince Caligiuri

In 2019, the NBA initially condemned Houston Rockets general manager Daryl Morey after he tweeted his support for Hong Kong protesters.

Following significant backlash from both sides of American politics, NBA commissioner Adam Silver responded with a strong statement which endorsed the importance of free speech.

The IOC also opted to turn a blind eye to China’s persecution of Uyghurs in the western Xinjiang province when it awarded the upcoming Winter Olympics to Beijing.

Simon told TIME that the Chinese Tennis Association had told him Peng was at home in China but he had been unable to communicate with her. There are fears that Peng could be under house arrest in Tianjin, the port city where she lives, as a punishment for challenging the regime, according to a report in the London Telegraph.

The WTA were contacted for further comment but did not respond.

Peng’s allegation of sexual assault was made on November 2 via the social media network Weibo, where she accused Zhang Gaoli, a former vice-premier in Beijing, of having sex with her against her will.

The post was only live for about 20 minutes, but Peng’s social media presence has since disappeared from Weibo (the Chinese-language equivalent of Twitter). The word “wangqiu”, Chinese for tennis, was also censored on the network.

Some of the world’s top tennis players have shared their concerns over Peng’s disappearance, including Naomi Osaka and Novak Djokovic.

In her Weibo message, Peng claimed to have had a decade-long, on-and-off relationship with Zhang, who is married. She alleged the relationship involved sexual contact on several occasions, but that one of those sexual encounters had not been consensual.

“That afternoon, I was very afraid. I didn’t expect it to be like this,” she wrote. “I didn’t agree to have sex with you and kept crying that afternoon.”